The Thief, the Freeloader, the Cheapskate and the Valuist

Due to social norms and peer pressure things like price-matching at stores, bringing a coupon to dinner or googling referral codes are seen as unpleasant and even unethical for some reason. Heck I even wrestled with how to display affiliate links on my own blog WHERE PEOPLE ARE COMING TO USE MY REFERRAL LINKS TO SAVE MONEY!! All because of mainstream society's problem with frugality.

Let me drop a truth bomb onto all of you: Is is perfectly normal to get the most amount of "X" for the least amount of money. X being anything you damn well want. This is where our story comes in.

Let's begin with the Thief - we'll call her Lucy. I've only ever known one Lucy and she was kind of a bitch.. sorry Lucy but the name naturally comes to mind when describing somebody unscrupulous.

Lucy takes what she wants. She doesn't pay if she knows she can get away with it. The five-finger discount is her speciality. In Canada, we have laws against Lucy's type of actions and because they are well-known and accepting by nearly everybody in society, Lucy's actions will eventually bankrupt her conscious and probably lead her to a prison sentence one of these days. Lucy will also have very few friends - it's easy to see a Thief for what they really are and she will be shunned by all her social groups, probably even other thieves.

In short, Lucy values objects of worth above all else, willingly sacrificing things like ethics and happiness.

Since it is illegal to steal, our above truth bomb needs a modification, otherwise it would be logical to pay $0 for the things we need or want. Let's try it again: It is perfectly normal to get the most amount of "X" legally for the least amount of money. 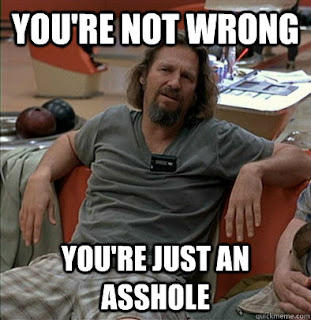 Onto the next page in our book, we witness the Freeloader, whom I'll name Matt. Matt is a douchebag I happen to see from time to time in real life so the name fits once again.

Matt doesn't steal perse, he actually just takes what he's offered for free if the opportunity comes up. The Freeloader's natural habitat is your fridge and will crack a beer you didn't offer him. If he knows you're buying dinner, he'll order a giant expensive meal with his expensive taste for wine and pack that shit up for leftovers. Your life will be dramatically more expensive keeping Matt around so it's best to have a arms length relationship like the one I have with IRL Matt. He eventually will realise that many, many short-term relationships will come and go and this has everything to do with him and not mainstream society.

In short, Matt values privilege above all else, including things like relationships and character-building things like hardship. He could also be summed up by this meme.

Since we don't want to be assholes to each other, let's modify the truth bomb.... It is perfectly normal to get the most amount of "X" legally for the least amount of money without destroying relationships with yourself and others.

The Cheapskate, whom we'll unfortunately call Ryan-of-the-Past, is me. Or was me.

Back then, Ryan had what I call today "crippling frugality." This is where he would sacrifice his future to make real monetary savings in the present. His rationale being short-term pain, long-term gain! His actions actually did not match up with this philosophy because the long-term or the future was never actually defined. Let's use an example:

Ryan goes to No Frills and buys only the products wrapped in yellow. Anything name brand is off-limits, unless it was cheaper. He'd purchase using the PC Mastercard for 3% back and then hit up the Dollarama next to it for the ingredients even cheaper than No Frills. Quality didn't matter much, price was paramount. He'd then carry all the food back to my apartment about 1.5km away because buying a bike isn't worth it when home is a walkable distance. Driving the car was out of the question, that's only for his commute to work. 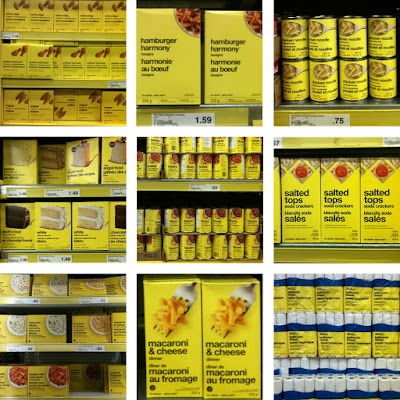 Looking back at whatever meal I came up with, I'd be satisfied with how much money I saved and the efficiency of it all. The taste, experience, time or anything else didn't factor much into the equation (along with any concerns my Wife may have had) just as long as they weren't unreasonable. Then I'd rinse and repeat as often as needed.

The problem is what am I saving all this money for? What needs were I putting on the backburner to further the real-gains of more money? When in the future did I plan on spending the money I saved? What would I have done with the extra time I would've saved by purchasing and riding a bike? How would my relationship with my Wife be different if I didn't ban non-essential groceries?

You see, Ryan would've given a lot of bullshit answers to these questions but the truth to the matter is if you don't plan a future then saving money doesn't make sense. Achieving a high savings rate has to correspond with an actual goal, not the pursuit of more money and figuring out the future later. Even a tentative goal like travelling the world or opening up your own restaurant. It's okay to change these goals but you have to have them.

In short, Ryan-of-the-Past valued money above all else and was willing to sacrifice current standards for a foggy future that he intentionally hid from himself to justify a pursuit of money.

Here's the truth bomb revised AGAIN: It is perfectly normal to get the most amount of "X" legally for the least amount of money without destroying relationships with yourself and others and neglecting your current-self for the unforeseen financial future.

I'm very proud to use my good friend to describe this individual - Chrissy! She's the type of gal to spend money where she sees fit and has a promising financial future that's been carefully crafted to achieve FIRE in her 40's. If some of you think your 40's is a little late for FIRE, you'd be wrong. I'll happily disprove this theory in another article and will link it here once it's done.

The Valuist is actually the advanced philosophical manifestation of the Cheapskate. Instead of bargain hunting with no future in sight, Chrissy shops for Loss Leaders on her Flash Food app because it will also be the place where she buys the rest of her groceries. Why wouldn't she save the money?

Maybe Chrissy shopped at a store that is slightly more expensive but was 1 km closer, saving her time. If she's within her budget then so what? If she's been saving herself time and cooking more delicious food and spending more time on creating a small business, isn't that worth the extra say $20 for shopping at Real Canadian Superstore and not No Frills that's further away?

The Valuist values their time AND money. it is a constant equation or balancing act if you prefer. Flas Food takes no time to order from, so there's value. If the app required you to preload an account with a certified cheque before purchases, you would delete it from your phone because the time commitment is way higher than the price discount of the goods. It would be off-balance. Since it actually just requires a credit card and pay-as-you-go, its perfectly balanced for a Valuist to take advantage of.

Our truth bomb is getting quite cumbersome to edit so let's revert it back to its original message with the understanding that being a Thief, a Freeloader and/or a Cheapskate don't actually work on the path to FIRE:

Thanks for reading, tomorrow we're going to explain a little further into detail the elevator pitch to FIRE.

You can email me here: canadianfire1@gmail.com

January 14, 2020
I'm here to fix the blurred line between what the FIRE movement is and what is isn't.
6 comments
Read more

If there is one thing I'm certain of, it's that I have one of the lowest annual expenses in Canada. Period. I spend exactly $16,415.28 to live! If I am that certain that my expenses are so low in comparison to the average Canadian, than I am that certain that I can accurately show you how I spend my money and what we both value doesn't come at a high cost that forces everyone else to work until 40, 50, 60, 70+.

Before you get skeptical, keep in mind I'm writing as a taxpayer, a homeowner, a husband, a father, a driver and everything else you and I have come to enjoy living a luxurious middle-class life - a.k.a. the Canadian Dream. I'm just like you.