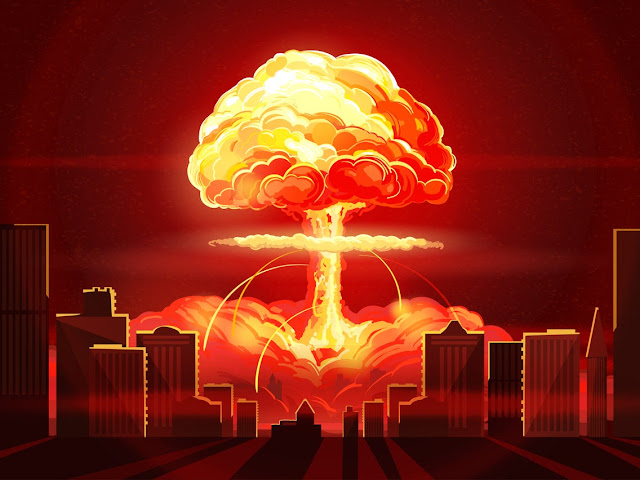 Okay, not just yet but you should be a safe distance when it does. If you've liked what I've written here so far, I regret to inform you that this will be my last post. More on that halfway down.
Like my Vortex of FIRE post, I'm revisiting a past article and rewriting it from scratch to remove my previous podcaster bias. Since it's my last article, I'm intrigued to see what I come up with.
The 3rd and final ending to the Requirements of FIRE:
Before we get onto the main entrée that is this blog keeling over and dying, let's first examine one last bit of misconception in the FIRE movement. This little paragraph or two was inspired by friend of the now-deceased blog. Her name is Maria over at Handful of Thoughts, and she owns 3 cars and wants you to know that while it might not be very "FI"of her, she essentially says you can fuck right off. I enjoyed the aggression in the article and wanted to add a point that she just didn't outright say (and I'm paraphrasing here):
"It shouldn't matter what I spend my money on; it should only matter that I'm saving towards FIRE."
Now whether or not Maria is achieving a 50% SR (savings rate) as per the Requirements of FIRE eligibility rules, it stands to me that she's making a good point and something I've often thought about but forgot to put into words until just now.
If somebody is struggling to maintain a 80% SR and goes down to a 30%, the damage could be lethal if the 80% lasted for a few months or the damage could be minimal if the 30% is the new max after years and years of ultra-high saving. What matters to me most is people take a 17-year path or quicker (aka a 50% SR) to FIRE because the longer you delay the less likely you'll need all that money in retirement anyways because you'll be working longer and will have higher social security as a result. To put another way, you saved a lot of money over a long period of time without a proper purpose.
In fact, we are all far too conservative about the amount of money we need (and I'm only speaking about FIREwalkers here). Average Canadians are screwed when it comes to retirement - they save too little and expect to much, they will refuse to lower their spending until push comes to shove. But us FIREwalkers are a disciplined bunch, saving 50% year over year is no small feat to accomplish. This unlocks flexibility, the ability to calculate risks, entrepreneurship, etc. just to name a few.
Yet you'll get the cry babies who want a more "balanced" path to FI (and not RE) and save 25% or some other weak ass number. That recipe will invoke a life-long struggle to save "just enough" while worrying about money and never having enough syndrome. I would argue these people are just collectors of money (badly, too) and are using FI as a terminology base for financial anxiety. Rather than obsessing about the differences between XEQT and VEQT or vilifying their own finances because they aren't optimizing transportation the way others do, why don't they just establish a savings rate and be done with it?
For example, if Maria has a 12% SR, her 3 cars are fucking stupid and she should drastically re-examine her path to FIRE. 12% is a joke - but then again if that's what she's capable of, by all means, do it up. But don't cry to me about FIRE being unattainable. But if her SR is 53%, her 3 cars are no problem - literally not at all. Sure, it's sub-optimal and she could crank out a better SR without them but she's already hitting my requirement and is going to retire early or whatever you wish to call it in a reasonable amount of time. It's reasonable because if you're not in the business of unlocking the ability to tell your place of employment to fuck off, you have no business in achieving FIRE and have probably accomplished little or nothing of actual importance.
Remember, FIRE is a life-hack designed to remove the 40-50 year grind of getting up and going to work each day - if you don't want that, just put 10-15% in a robo-advisor and call it a fucking day. Oh, and don't take out any other loans besides a reasonably priced mortgage.
So the Blog is Dead, huh?
You betcha.
I'm pretty confident about this decision and if you're eagerly wondering why, it's easiest if I put it into bullet points as usual. In no particular order, here's the reasons to quit:
It's been fun (except when it hasn't)
All the best, hope I helped at least a few of you,
Ryan Myricks
You can email me here: canadianfire1@gmail.com
** The blog will eventually self-terminate when I won't renew the domain name. Sometime in 2021 **

November 04, 2019
Photo by  Kelly Sikkema  on  Unsplash Like most of you, I've read The Simple Path to Wealth and thought "Wow! Now to head to Vanguard and set up my account! Hey, WTF??" If you haven't read the book, feel free to read it in blog for m on the authors blog right here . Probably a proper rite of passage for any Canadian pursuing FIRE is to hear about the message from an American blog or podcast and then immediately google VTSAX only to realise that the mutual fund is not offered to Canadians. To add further insult to injury we can't even open a Vanguard account. ....well fuck you too, Vanguard. Just kidding! Vanguard is Canadian-friendly - very much so. They have superb products available for Canadians to buy in the for m of ETF's from the numerous stock exchanges around the globe. This certainly adds complexity to the average Jane or Joe trying to buy their first index fund but not greatly so. In fact, I keep it VERY simple in this blog post called the 7 Simpl
4 comments
Read more

January 21, 2020
Photo by  Elijah O'Donnell  on  Unsplash You've been thinking about investing for a while but you've been held back by several excuses. Some of these are legitimate (everybody says to do this or that... but is that right?) and some of them are pathetic (I'm not sure right now is a good time to buy.... just look at the news!). I have some very simple advice for you: Fuck the news and fuck the piles of noise everybody is "adding" to the "conversation."  It's simple, you already know you need to invest and you probably have the cash sitting somewhere else collecting a garbage interest rate. The more complex you make it, the more easily these websites, robo advisors, banks and mutual fund companies can profit from you. I have nothing to gain from you - so I have this really easy step process because I haven't been bought to make it more complex or sell you additional garbage. No must-use language from advertisers, no paywall and no book
2 comments
Read more

January 14, 2020
Photo by  Mark Duffel  on  Unsplash I'm here to fix the blurred line between what the FIRE movement is and what is isn't .
6 comments
Read more

July 29, 2019
Photo by  Charles 🇵🇭  on  Unsplash We the community use Public Mobile . Let me tell you why. ** My referral code is at the bottom of the page. Please consider using it to help support my blog and my mission. Last Update: Jun 2020 ** You'll get $10 credit! Here's a list of why Public Mobile is the best phone plan out there. FYI - I'm not paid by Public Mobile, I just really like them and so does the FIRE community. Let us help you see the light. #1 They use the Telus network, which is very, very good. Check your phones compatibility here . For reference, I use a Google Pixel 2 XL and my wife uses an iPhone 6.  #2 Yes, you can port your number. #3 Three very cheap plans that should cover 99% of Canadians AND their businesses needs: *Ontario bias but I've checked and most provinces are identical* $15/month - unlimited international text, 100 minutes, unlimited incoming calls, 250mb of data $25/month - unlimited international text, unlimited nationwide
8 comments
Read more