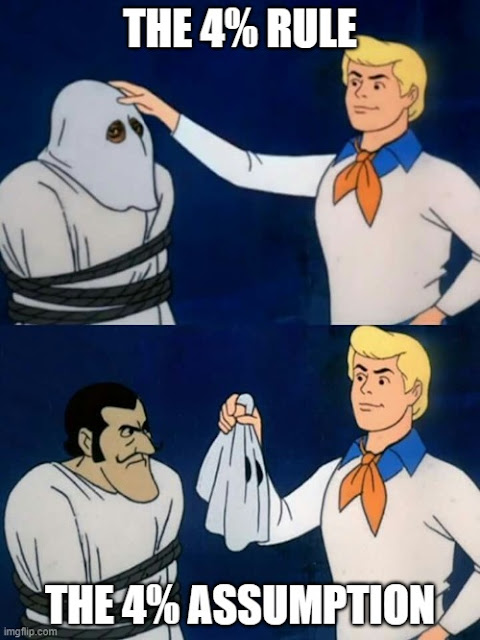 When you first learn about FIRE, the Trinity Study is everywhere. Better known as the 4% Rule, it has come to be the million dollar formula for our movement. Invest $1 million, withdraw $40k/year and you're good. So people calculate FIRE numbers usually around that mark.

This is both good and bad information.

You are forced to objectively look at your daily, monthly and annual spending in sharper contrast to your retirement goals. Picking up Tim’s every morning turns out to be a big deal when you spend $18.5/week and therefore have to add $24,050 to your FIRE number. It’s a lot more money than brewing and eating at home for $9/week instead ($11,700 to FIRE).

4% is a big percentage and forces you to get your ass in gear. Start saving and investing, pronto! Of course others will cry and whine that it’s too hard or implausible to save that amount of money but those are their fears and not yours.

When you accomplish the incredible feat of reaching FIRE you will almost certainly be set up for the rest of your life. But this is where the Rule is revealed to be an Assumption only.

You will earn more money after FIRE

If you were to honestly tell me that you will never, ever, earn another dollar after reaching your FIRE number I would end our friendship immediately. I can’t tolerate liars in my midst. The truth is there are an ultra small group of people with this intention, who put in their two weeks at work and now the last pay cheque will tip them over their FIRE number. As if.

FIREwalkers are ambitious and entrepreneurial. I don’t believe people can achieve FIRE without those two traits to some degree. We won’t just stop our systems of wealth creation at FIRE because we cannot. Breaking habits (good or bad) is incredibly difficult and usually comes with growing pains. This is one of those good habits that won’t be broken. This isn’t an argument for one-more year syndrome, it’s an argument for personal growth throughout your journey.

Before FIREwalkers achieve their number and especially those criticizing from the outside always miss the most fundamental characteristic of the individual willing to see this journey through: FIREwalkers are in business for themselves. Trust me on this. Somebody willing to put in place the systems of achieving FIRE is not suddenly going to blow their investments on vacations or make sudden and incredibly risky moves in the stock market for further profit. Nor will they suddenly become lottery propaganda and lie on the beach everyday because they can.

Instead, the individual on FIRE will likely become more conservative with risk and larger expenditures. More thought (not less!) will be put into spending both time and money. Is this not the entire point of FIRE?

When you Assume 4% you will continue to be in business for yourself, seizing opportunities as they show up and picking when and what you do for additional money. The pile of money you earn won’t matter much to you, the community and individual benefits will. You will earn additional money, there’s no doubt in my mind of that, but FIRE will let that income have more meaning to it because the work required was chosen with much more intention about who you are, not how much money you wanted to make.

So the 4% Rule is a falsehood in my opinion; it is linear and you are not. But the 4% Assumption? Well…. that’s everything.